Lions Clubs throughout Ireland to raise €100,000 for ‘Hero Shield’ Visors

Lions Clubs have pledged to raise up to €100,000 to fund 200,000 ‘Hero Shield’ face visors which will be distributed free of charge to front line health workers throughout Ireland.

The project, led by James O’Sullivan of Macroom Lions Club, was initially supported by nine other clubs in the Zone and has since gained the support of Lions Clubs District 133, which covers the island of Ireland. District Governor Bernard Black has asked the 106 Lions Clubs in the District to support the project with donations.

Rodger Curran President Kilkenny Lions Club said that the Club was delighted to support this important initiative and our contribution has been sent to the national Lions coordinators. He thanked all our front line workers and said the whole country is so proud of them.

‘We are already getting a very positive response from Lions Clubs all over the country and we are confident that we will reach our target of €100,000. Not all heroes wear capes but as Lions Clubs, we can help make sure our heroes wear shields’.

‘Twenty companies across the country are giving their time, talents and tools free of charge to produce these visors which are manufactured here in Ireland, are certified and meet EU Standards.  Covid 19 teams North and South have already approved the Lions Hero Shields. An Garda Síochána, Hospitals and, Care Homes North and South across the country have been contacted and are anxious to take delivery of our PPE’s as soon as possible. The need is clear as statistics show front line staff account for almost a quarter of the Covid-19 cases in Ireland’.

‘The 1.4m members of 46,000 Lions Clubs throughout the world are dedicated to serving their communities and this project enables Lions Clubs to make a meaningful contribution to the battle against Covid 19 in Ireland. It also complements the wide range of voluntary community support which Lions Clubs have been offering to their local communities since the virus first emerged in Ireland.’

The Hero Shield is a full-face visor designed to be used by front line workers in the battle against the COVID19 virus.  It is a vital piece of Personal Protective Equipment in the armoury of kit helping to protect those who put themselves at risk to help others.

The visors are manufactured in Ireland by Hero Shield, a new not-for-profit collective of companies, and are certified as meeting all relevant EU standards. The HSE has already noted that, as the visor has no moving parts, it is easier to sterilise and reuse than many existing solutions.

The Hero Shield will be available free to HSE and An Garda Síochána personnel in the Republic of Ireland and NHS and PSNI personnel in Northern Ireland.

Kilkenny Lions Club have recently adopted their environmental charter (available in the Downloads section of the website).

In line with this we will shortly be embarking on our Environmental project as one of our service projects. Exciting news to follow….

The Launch of the Lions Club Spirit Of Christmas Appeal was held recently in City Hall. In Partnership with our friends in The Kilkenny People , KCLR96FM and the local business community , this event hopes to raise in excess of €25000 to help the needy in the community this Christmas.

Bernard Black has been elected as District Governor of Lions Clubs in Ireland.

He heads an organisation of 2,500 Lions who are members of 106 clubs located throughout the island of Ireland. They are part of the worldwide Lions Clubs International which is the world’s biggest voluntary service organisation with 1.7m members in 45,000 clubs spread across 206 countries and regions.

Bernard Black is a native of Carnlough, in the Glens of Antrim, an ‘Area of Outstanding Natural Beauty’ and a ‘World Heritage Site’.

He was educated at St. John’s PS, St. MacNissi’s College, New University of Ulster and the University of Liverpool and holds a degree in Ecology and Post Graduate qualifications in Education and IT in addition to a Masters in Microelectronics.

His father was a Charter (Founder) Member of Antrim Coast Lions Club and Bernard joined the club in 1984, the year his father died. A committed Lion from the beginning, Bernard was twice Zone Chairman and twice Regional Chairman. He has been Global Leadership Coordinator and was second and first Vice District Governor prior to his election as District Governor.

Bernard is John Moores Foundation Trust Fund manager for Northern Ireland and is an elections consultant for both Idox Elections and Modern Democracy.

With more than 1,000 books on his Kindle, Bernard is a keen reader. He also claims to ‘play the guitar badly’ and enjoys computing and consuming red wine.

The eldest of a family of five boys and two girls, Bernard married Kate 43 years ago and they are blessed with four daughters, two grandsons and two granddaughters

President of Kilkenny Lions leads clean up on outskirts of City. 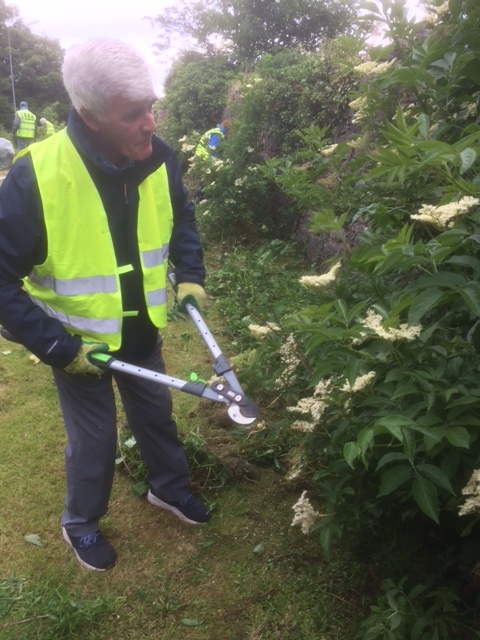 All the proceeds of the day went to Carlow Kilkenny Homecare Team.

Philip Tierney President Kilkenny Lions Club said at the presentation that they were delighted to assist the Homecare team who do such valuable work in our community.

Pictured above is Philip presenting the cheque to Ian Wilson of the Carlow Kilkenny Homecare Team with both Captains of the Kilkenny golf club also in the photo, Mark Grant and Eithne Murphy

Performing on the night will be :


This is the 25th year the Lions Club has presented its Schools Concert in conjunction with the Kilkenny People
and KCLR 96fm.

All proceeds go to the Spirit of Christmas Hamper & Charity Appeal to help the needy of Kilkenny City and County.
Admission is €10 for adults and €4 for children with a family of 4 for €25.There will be a number of prizes drawn from the door tickets. An excellent nights entertainment is guaranteed.

Lions members were once again out in force to help with the Keep Kilkenny Beautiful Team, see some of the photos below.

Our beautiful city needed sprucing up after the long winter! The Kilkenny Lions Club and Keep Kilkenny Beautiful Committee have joined forces to tackle some derelict areas in Kilkenny City with a monthly clean-up of specific areas until the end of August. Together we can do more!

These areas are not in public ownership but are visible to the public. The May efforts proved very successful, as evidenced by the large amount of litter collected in just one private derelict area! 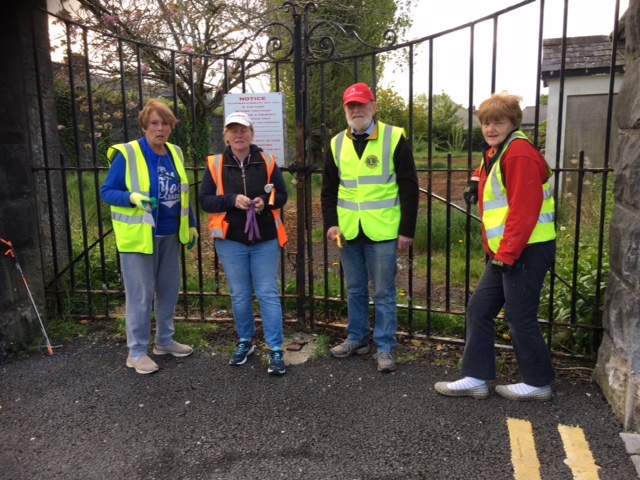 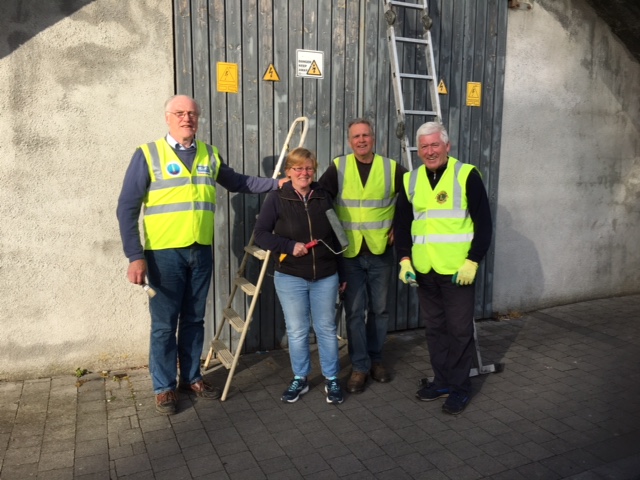 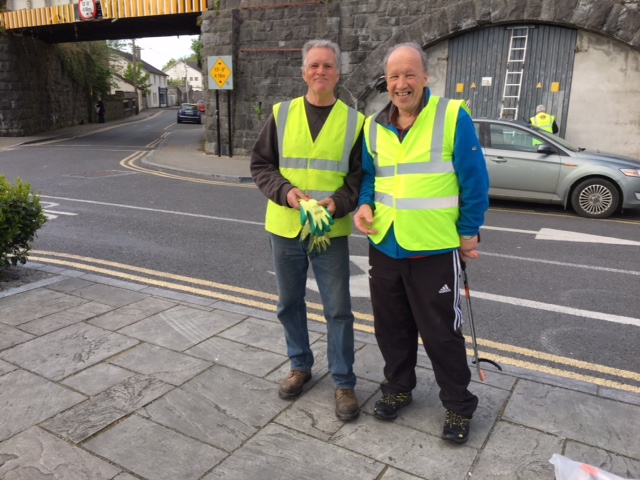 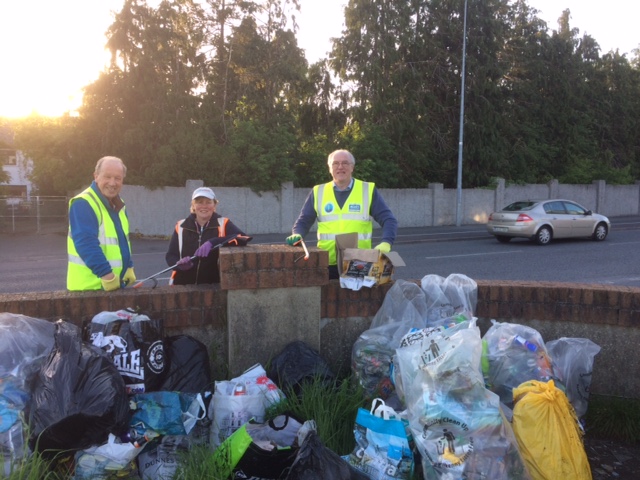 Come and join us for the June 14th clean-up effort, and help KEEP KILKENNY BEAUTIFUL.#TogetherWeCanDoMore #KeepKilkennyBeautiful